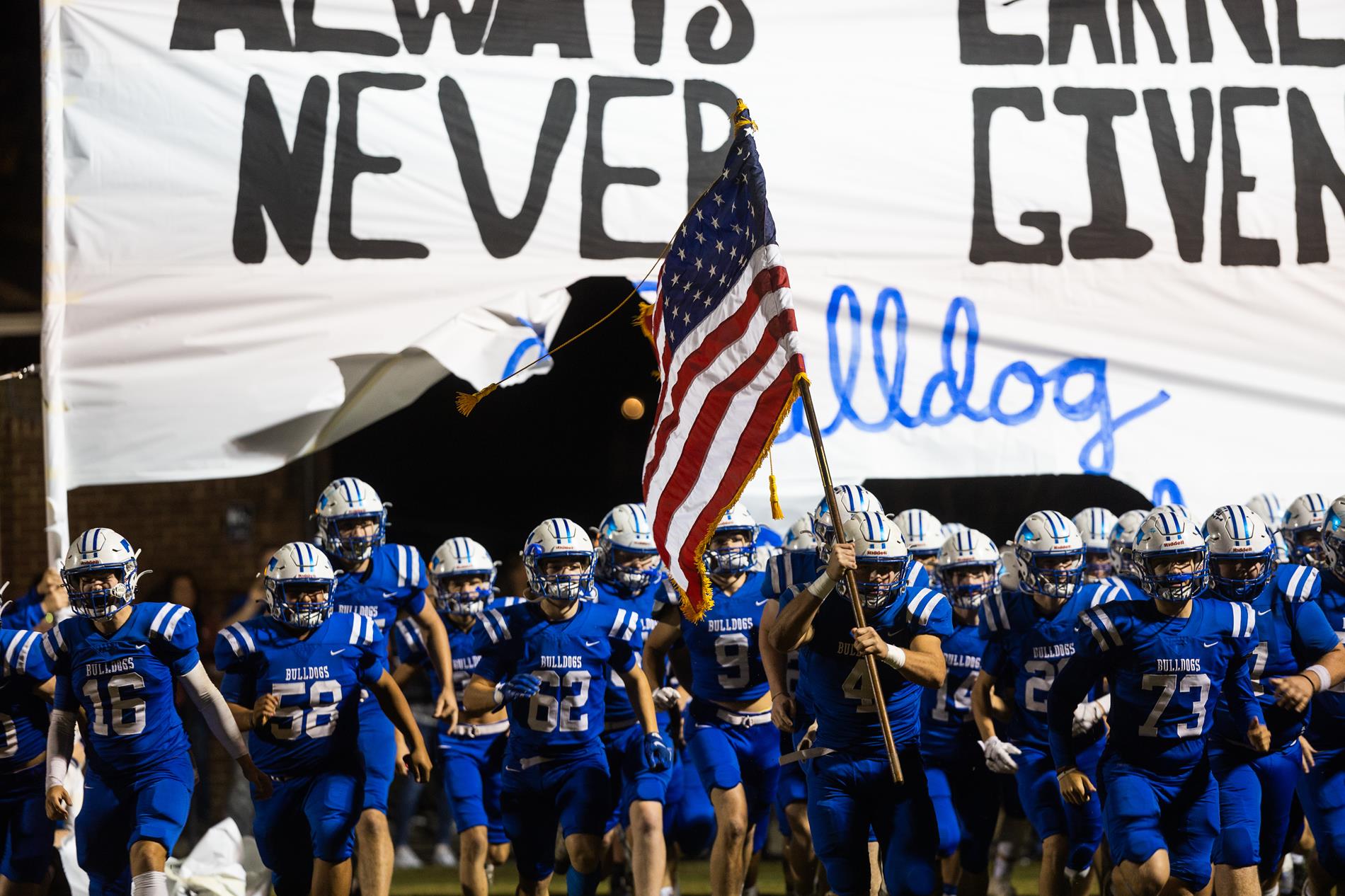 It was a breezy Veterans Day evening with the American flag waving in the north endzone of Sam R. McCain Stadium/Clarence Blevins Field, when the Trion Bulldogs welcomed the Commerce Tigers to fight it out on a soggy field in the first round of the GHSA state playoffs. The Bulldogs won the coin toss and elected to receive, and they controlled the game from beginning to the end, winning 45-21 and advancing to the 2nd round of the playoffs.

Kade Smith had a great night at quarterback, including a 51-yard touchdown pass to Garrett Mahan on their second possession. Logan Eller was the workhorse all night and the “Bull” in the Dog, which included a brutal 54 yard tackle breaking sprint to the end zone late in the 4th quarter. Toby Maddux had four elusive touchdowns from the crowd favorite Jumbo set. The Bulldog defense was hard-nosed all night and held the Commerce running game in check. Ethan Willingham got two key interceptions during the game that helped shift the momentum back to the Bulldogs. The guys in the trenches, the offensive and defensive linemen, fought like a band of brothers all night to secure the win.

During the first possession of the game, Eller bullied his way for a1st down; Logan Stokes caught a short pass and picked up another 1st. The Dogs moved it steadily to the 35-yard line only to stall. Andy Ramirez, the Bulldog with the golden foot, kicked the field goal for a 3-0 lead.

After forcing the Tigers to punt, Trion methodically drove the ball down the field with the Jumbo team giving us first downs.  Kade Smith, behind a curtain of offensive line protection, hit Mahan on a 51 yard cross country pass for the touchdown. Ramirez placed it between the uprights, and Trion took a 10-0 lead.

On Commerce's next possession, despite tackles from Kham Durham and Clay Chesley, Commerce trapped the Dogs and ran for a big-play TD  and put up an extra point to tightenTrion’s lead, 10-7 .

With the game tight early on, the Dogs countered the Tigers’ score on their 3rd possession. Toby Maddux made a strong run to the 20 with a big block by Chesley. After plowing closer with the help of the Jumbo team, Toby danced the 6 yards to the end zone and GoldFoot Ramirez added the point for a Bulldog lead, 17-7.

Commerce returned the kick with a minute left in the 1st quarter. Big stops by Crawford Lee, Maddux, and Eller forced Commerce to punt.

Trion took control and Eller steamrolled for a 7 yard gain. Smith passed to Maddux who sprinted for a 40-yard pick up and a first down. The Dogs continued their attack behind the force of the offensive line, with Eller, Stokes, and Chesley gaining yardage and first downs. Eller was stopped at the 2, and the Jumbo crew came out to get a first down on the one yard line. Maddux carried it over the goal line, and Ramirez added the point, and the Bulldogs took a decisive 24-7.

Commerce tried to get something going on their next possession, but Cohen Blashke got a massive sack and forced a punt with 2 minutes left in the half.

The aggressive Bulldog offense went to the air attack with little time left in the half in an attempt to put the game away. Penalties and incomplete passes forced the Bulldogs to punt. On their own 45 yard line with time running out, Commerce trapped the Dogs up front and raced 65 yards up the middle of the field for their 2nd touchdown and added the extra point, narrowing Trion’s lead, 24-14.

Maddux would receive the Commerce kickoff at the 10 yard line and return it to mid-field breaking tackles all the way, but the 1st half would end with a Bulldog lead 24-14.

Commerce would receive the kickoff to start the second half. Collier Gable, Blashke, Eller, Durham, Stoker, and Logan Stokes would punish the Tigers. Being behind the sticks, Commerce would throw for a long pass to pick up a first down. On third down, the Tigers ran off the left side and scored a TD from the 11 yard line. Adding their extra point made it a  24-21 nailbiter.

Clinging to a three point lead, the Bulldogs needed to score. Toby Maddux received the kick and ran it to the Bulldog 25 yard line. From the Jumbo set, Toby ran it again for positive yardage, and Kade sent a quick pass to Chesley for a gain.  Kade then completed a critical long pass to Ethan Willingham, for a 1st down and 15 yard gain, then threw a dart down the middle of the field to Logan Stokes. A penalty called the play back for a lineman down field. At 2nd and 12, Logan Eller got the call and drug Tigers down the field like a National Geographic TV clip, and the Dogs got the ball on the 25.  On third down and 7, a false start made it 3rd and 12. Kade hit Toby with a pass for a 1st down inside the 10! Logan ran it closer, to put the Dogs 2nd and goal from the five. A loss on the next play made it 3rd and goal from the six, but the Jumbo set came out to help Toby run it six yards in for the much needed touchdown. Ramirez kicked the extra point under heavy Commerce pressure, giving the Bulldogs a ten point lead, 31-21.

When Commerce got the ball, the strong Trion defense was like an iron curtain. Ezra Adams made two great stops. Commerce converted two 4th downs before throwing a long  pass that Ethan Willingham intercepted. The interception was a huge momentum maker for the Dogs.

When Trion took over, Logan Eller broke loose for a massive 54 yard touchdown run, with help from a huge block by Lucas Stoker. Ramirez kicked the extra point and the Dogs took a whopping 38-21 lead in the fourth quarter.

Commerce got the ball and had to pass, but again Ethan Willingham was there for another huge interception. Toby took it to the 25 yard line for a 1st down, but the Dogs had to punt.

With 4:39 remaining, Trion was up 38-21. Commerce turned it over on downs and the Trion offense took over at first and goal on the 9 yard line. With the Jumbo set in and a direct snap, Toby would take it in on a 7 yard run for a 44-21 lead. Ramirez would put it through the uprights to make it a final score of 45-21 for the Bulldog playoff win.

The Bulldogs will travel to Alpharetta to play the private school St. Francis next Friday. We’re behind you all the way, Bulldogs!